Strandja is one of the most interesting in terms of flora, mountains in Europe. The particular geographical situation of the mountain and climatic factors, determined by it and its paleontological past are the cause to meet floristic elements in the mountain, the combination of which is unique to the continent. The mountain is a vegetation oasis where plants from the temperate zone of Asia Minor, the Caucasus and the Mediterranean are found.

Mountainside established 1670 species of higher plants. The composition of its flora established 49 relict species, some of which are edificators and dominants, 56 are rare and 10 – endangered as Strandja berries, Crimean tea, Strandja oak. 70 out of the 700 included in the Red Book of Bulgaria species are found only in Strandja and along the coast.

In Strandja a reversal of geographical differentiation of oak and beech ecosystems is observed. This oak grows on ridges and beech occupies low and moist ravines. This phenomenon is linked to climatic factors, the peculiarity of the relief and others.

Geographical and climatic features of Strandja mountain predetermined specific characteristics of vegetation, which is an interesting conglomerate of European, Black Sea and Caucasian species, distinguishing in its origin, biological characteristics and level of development. They are divided into four major types of vegetation: coastal forests, marsh and dune vegetation; formations of durmast and eastern beech and evergreen shrubs; forests of eastern beech in the alpine area (500-700 m); xerothermic eastern beech formations with or without remnants of Mediterranean vegetation. Undoubtedly eastern beech is the dominant type of tree in Strandja Mountain. There are also oak forests, which occupy 7% of the forested area. The forests of eastern beech and oak formations in Strandja Mountain have unchanged ratio and composition, which is very rare in Europe. Coniferous forests, which can be seen scattered in the oak and beech forests as separate formations (10% of the total forested area) are artificially introduced at a later period of date.

The vegetation cover in the area is formed mainly of deciduous tree species. Among forest vegetation a central position occupy the ecosystems of oak, Turkey oak, hairy oak and common hornbeam. Specific are the forests of eastern beech and eastern durmast, which are found mostly at fresh habitats. Eastern beech occupies 12% of the forest area in Strandja. In beech formations with evergreen vegetation unique species are found such as Europe Strandja periwinkle, Strandja berries, holly, Strandja wolf bast, laurel and others.

In the undergrowth of eastoak, eastdarmust and eastblagouna forests, evergreen Pontic vegetation is common (Strandja periwinkle, laurel, heather, etc.), which gives them a peculiar appearance and uniqueness. Typical tree species is the Strandja oak (Q. hartwissiana), whose limited range in Europa highlights its relict nature.

Near the river and wetland areas of the socalled dense periodically flooded forest, fieldash and more rarely the fieldelm, black alder and locations of summer oak, Quercus pedunculiflora, Strandja oak, hornbeam, white poplar and others dominate. Especially typical are evergreen woody vines – Skripka, deciduous woody vines such as clematis species, wild vine, grassy Lian – hop and more. As for the grass cover typical plants are the bitin squill and others.

Relics are species that were widespread in the past geological eras. In Strandja Mountain 64 relict species are found, seven of which are found only here in Europe – periwinkle, Strandja wildly tree Caucasian blueberry, lazhnik, ring-necked holly, skirt and colors Hypericum.

Endemic are species the spread of which is confined in a separate area (geographical region, country, etc.). Bulgaria ranks fourth in Europe in the proportion of endemic plants – about 9-10% of the seed plants. The endemic species account for 56 species, tarilovo speedwell and yordanov podrumiche are only found here in the whole world. Unique for the Black Sea coast are Kaliakra campion and lepidotrihum and 40 species are unique for the Balkans, such as Strandja soapwort.

Typical representatives of the vegetation cover along the Black Sea coast are: 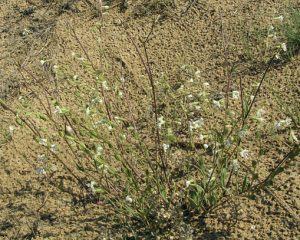 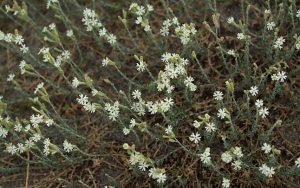 and the endemic to the Black Sea coast lepidotruhum.

Strandja forests are rich in ancient, monumental durmast trees, oak, lazhnik, hornbeam, oriental beech and oak. They are scattered throughout the mountain and inspire respect for durability and strength.

In the reserves of Uzunbudzhak, Tisovitsa and Vitanovo forests of trees with diameters of 80 to 120 cm are preserved. Beech trees with width of 150-200 cm. They grow in the forests near Kosti, Brashlyan, Stoilovo in Arabadjiyata Bair and Caravan Serai. Impressive, huge trees of Strandja oak grow in the karst rocks from Vizitsa to Byala voda and  from Bliznak to Malko Tarnovo. Huge oak, beech and cerris trees coexist in the mixed forest near Kazakov pool.

Tree species of the beech family. The area of eastern beech covers Southeast Europe, Asia Minor and the Caucasus. In Bulgaria it occurs in the Eastern Balkan Mountains, Strandja and the lower parts of the Eastern Rhodopes.

The eastern beech is more hydrophilic than usual. Leafing through is about two weeks earlier and it grows in the lower belt of up to 700-800 m above sea level.

Yew is high conifer with a dense crown. It is the most shade – resistant conifer in Bulgaria. In the past it was a common tree in Strandja, but at the time, due to massive felling for commercial use only 5 deposits of yew in the Bulgarian part of the mountain are found, one of which is Tisovitsa reserve. Protected species under the Biological Diversity Act. 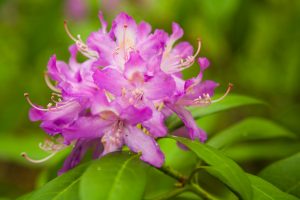 This unique, precious, rare and protected plant survives only in Strandja. In Asia it can be found in Turkey, Lebanon, Georgia, the Russian Black Sea coast of the Caucasus, in some areas of the Himalayas, Afghanistan, northern Pakistan and Tajikistan. Rhododendron ponticum generally loves semi-shaded areas with high air and soil moisture.

It is believed that the plant has hallucinogenic effects on man and the honey obtained from grazing Rhododendron ponticum, can be toxic if consumed in large quantities, and soon after its removal. 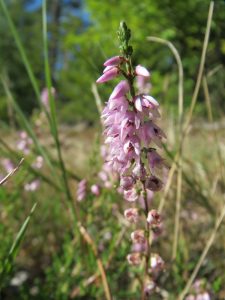 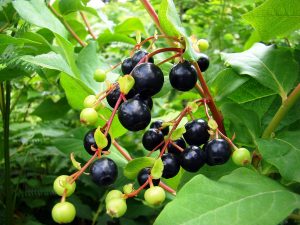 One plant that is of particular interest to all locals and guests of Strandja are the famous Strandja berries, also known by the name Caucasus, which has the same taste and medicinal qualities such as bilberry, but unlike it, reaches 3 meters in height. The plant is under the protection of the Biodiversity Act and is found only in shady forests.

Strandja speedwell – the only one in the world 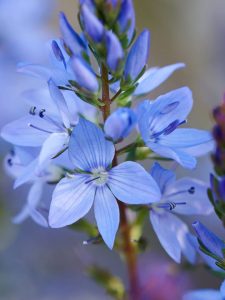 Tarilovo speedwell (Veronica turrilliana) or Strandja speedwell, this beautiful flower can be seen only in Strandja. It does not grow anywhere else in the world. It is a perennial herbaceous plant. The flowers are purple-blue with pale yellow ring in the middle. 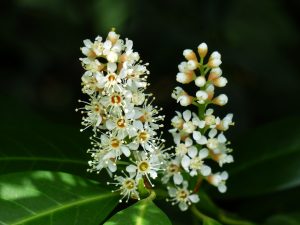 Relict species, representative of Pont-Evksinski east-oak vegetation in the forests of Strandja. Evergreen shrub with thick, glossy leaves. They are dark green on top and on the bottom are lighter. The flowers are white, gathered in clusters. It blooms from May to June. The fruit is black, stone and it ripens in June. In the beech forests the laurel bushes are mostly creeping in ground branches, forming a continuous coating on the soil. In open spaces laurel grows near small trees with 3 meters in height. 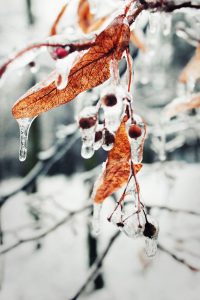 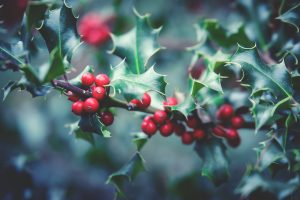 Evergreen shrub or a small tree with a height of 6 m and a diameter of the stem up to 10 cm. It participates in the undergrowth of Strandja east-beech forests with holly, laurel and Strandja berries. At bright places it blooms and bears fruit. Its branches go on the ground and roots and often form dense thorn bushes. The fruit and leaves of the holly are poisonous. It is a protected species under the Biological Diversity Act. 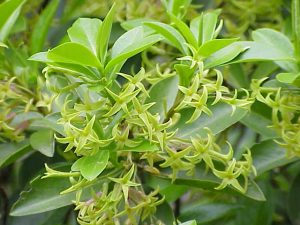 Evergreen shrub with upright or recumbent stems of up to 1 m in height. Most often it  grows in small or larger tufts along the edges of woods and open, bushy spaces. It occurs throughout the whole territory  of Strandja Mountain. Mostly it can be found  at a higher altitude to the central ridge of the mountain. It is a poisonous plant. It is a protected species under the Biological Diversity Act. 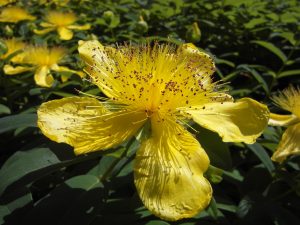 Small evergreen bush with a height of 50-60 cm, with hard, leather, bright green leaves located on branched, perennial stems. The colours are bright yellow, attractive. It covers the soil under oak trees with dense floral carpet in early summer. A protected species under the Biological Diversity Act.

The most famous among Strandja are – monkey, papilionaceous and tridentate; simple, purple and baggy dlanokorenik; anakamptis and bicornuate bee.

In Strandja many rare and interesting herbs can be found. You can enjoy the cognitive route “Herbs of Strandja”, passing it you can see (depending on the season): liquorice, mint, horsetail, forget-me -not, ivy, thyme, white and yellow yarrow, blue savory, St. John’s wort bedstraw, burdock, nettle, ash, hawthorn and many others. (Source www.strandja.bg) 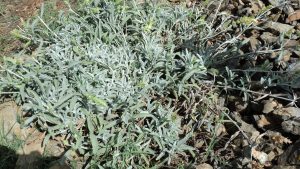 Crimean tea from Strandja competes the mountain Mursal tea. The little famous Crimean tea is no way inferior to the famous at home and abroad, “Mursal” tea which is allegedly drunk even by American and Russian astronauts during training. Crimean tea is one of the wonders of Strandja. The herb is endemic or otherwise – species that grows only in one place in the world. It blooms in yellow and its seeds ripen in late July. The tea has antioxidant properties and helps reduce the risk of several cancers, high blood pressure, atherosclerosis, heart attack and stroke, and it is praised by the locals. Crimean tea is a herb with a multi impact on the body and stimulates the immune system.

Crimean tea is a perennial herb that grows in rocky limestone terrain. To the south of Malko Tarnovo in the Turkish part of the mountain, Crimean tea is more common in karst rocky areas and widely harvested and sold as dried flowers at the market in Lozengrad/ Kırklareli /.

St. John’s wort is a large family of plants. At about 370 species of the genus cilantro exist all over the world with different geographical distribution. St. John’s wort is widely known as a means of herbal treatment for depression. 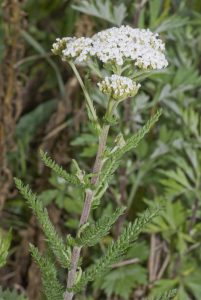 Yarrow is a perennial herbaceous plant, reaching a height of 50 cm. Its leaves are cut with linear pointed petals and blossoms – flat, composed of several small flowers. The herb blooms in the months from May to September. It occurs in grassy places at an altitude of 2000 meters. 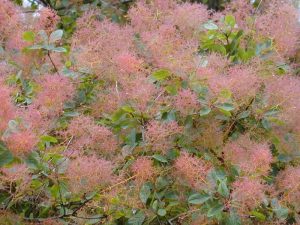 It is one of the herbs with a strong antibacterial effect, known from our grandmothers’ notebooks. The healing power of this plant has been known for millennia. The magic sumac or as it is known in Grandma’s pads – tetra, managed to cure even a bite by a wolf. When applied topically, this herb relieves inflammatory processes not only in the surface layer of the skin, but also those which affect the deeper layers. The herb grows on rocky slopes with dry soil and it is usually a shrub, reaching a height of 4 meters. It blooms in late August and early September. 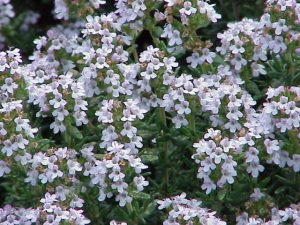 Thyme is a perennial herb with creeping stems and evergreen oval leaves. The flowers are from pale pink to red. There are very closely related species and forms of thyme. The plant smells very nice and is used to treat coughs.