Strandja belongs to the Srednogorie – this is a transitional area between the young alpine formations to the north (Stara Planina) and the old Thracian massif on the south (Rhodope Mountains). It is believed that the so called Marishki joint passes along the western border of Strandja region.

The rock composition of the mountain is represented by igneous rocks (gabbro, diorite, montsonite, granite, etc.) which make up the majority of the coastline of the mountain. Sedimentary rocks are also widespread- sandstones, shales, marl, clay limestone, and others.

Mountain ridge in Bulgaria and Turkey, a part of the transition fault-block area. It rises between Burgas lowland, the Black Sea and Eastern Thrace. There are three distinct ridges (South, Border and Bosnia). The highest is the southern ridge (northwest-southeast), entirely in Turkish territory (mahya dağı peak, 1035 m). The border ridge emerged from the valleys of Rezovo river and Veleka river( peak Great Gradishte, 710 m). The  hill Bosnia is situated to the northeast(Mount Papia, 502 m) with branches Rosen hill and Medni Ridge. Strandja is made up of old (mainly Paleozoic) metamorphic rocks and granites and metamorphosed Triassic and Jurassic sediments. The mountain is a hydrographic unit – the rivers of Veleka, Rezovska, Ropotamo, Fakiyska and Dyavolska spring from Strandja – in Bulgaria, and Ergene – in Turkey.

The relief of Strandja is hilly and low. Strandja Mountain is an old-folded mountain. The interesting thing about it, is that it is situated over a rib water between Europe and Asia. Its structure of the seats is highly porous. Extinct volcanoes have been established (Mount Great Papia – 502 meters). As a result, today we observe geological past karst type of terrain – very picturesque and interesting. Its various forms – trucks, whirlpools, caverns, varying in size and complexity can be seen throughout the entire mountain. Steep carved ravines, rounded ridges, scree and precipices are typical for Strandja. This makes it dangerous despite its low altitude. The geomorphological processes still continue today – the coast is sinking a few millimeters per year, while the interior rises.

The mountain is low, but the river valleys are deeply carved into the hills, which makes the sense to any visitor that they are into the debris of a much higher mountain. The leader of Strandja is Mahiada peak (1031 m), which is located in Turkish territory. The highest Bulgarian peak of the mountain is The Great Gradiste (709 meters). The highest peaks of Strandja (Bulgaria) are: Cervansarai – 632 meters near the village of Slivarovo, St. Elias – 563 meters near the villge of Brashlyan; Garvanitsa – 623 meters near Kachul; Great Papia – 502 meters near the village of Kosti; Ehekchiite – 492 m; Bosnia – 454 m; Batak cheshma – 509 m; The curved meadow – 589 m; Arabadjiyata hill – 709 m; Koychov hill -622 m; Kenardja – 547 m; The Grand Mound – 602 meters and more.

Strandja Mountain is a magnificent sight – lush green forests that cover the ridges of the mountain, which are characterized by undulating terrain and gorgeous green meadows. In Strandja Mountain mostly beeches and oaks grow, but there are many other species of trees, including conifers.

The rivers of Strandja belong to the Black Sea catchment area. Many Bulgarian rivers spring from Strandja Mountain. These are the Ropotamo (Ropotamo), Veleka (Veleka), Devil’s River and Rezovo river (Rezovska). Through Bulgarian territory  the  rivers Mladezhka, Aidere, Fakijska, Ropotamo, Izvorska, Dudenska, Stramnitsa, Elenitsa and other run totally or partially. The remaining water resources are concentrated in the western Karst region, where there are over 120 springs. The springs around Malko Turnovo have the highest rate – 398 l / sec. Local people believe that their water is holy and has healing power. According to some legends the greatest healing power source is located near the village Gramatikovo – The Great Ayazmo.

Veleka originates from numerous karst springs near the town of Kovchas, Turkey. This section of the river is characterized by high afforestation and no significant adjustments. In Bulgaria Veleka develops its network between the Border Ridge (Rezovska Hill) to the south and to the north with the Bosnia ridge. Veleka features with the most developed of all Strandja rivers tributary system. The left tributaries are more numerous and more high-watered than the right. They descend on the southern slope of the hill Bosnia. Veleka’s length is of 147 km and the catchment area of ​​the river on Bulgarian territory is 994.8 km2. The pool has west – east elongated shape which favors rapid runoff of rainfall and the formation of large volumes of high waves in the runoff. Along the river Veleka there is  small medium altitude – 311 meters. A significant part of the watershed is at an altitude of 300 to 600 meters. Veleka River enters Bulgaria with beautiful rocky gorge between the villages of Moryane and the place Petrova Niva. 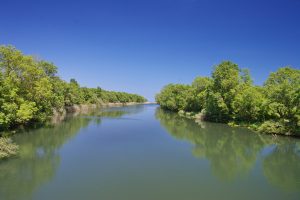 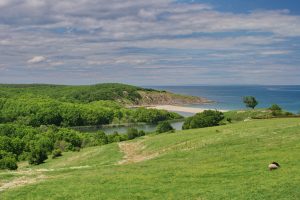 Rezovo river, known in Turkey under the name of Paspalderesi, springs east of the town of Kovchas after the village of Paspala, Turkey,and it is a border river between Bulgaria and Turkey. It runs mainly eastwards in a deep valley and empties into the Black Sea by a firth. In its middle and lower course a number of meanders are instituted. The valley slopes of Rezovo river are covered with oak forests. Its length is 112 km with 738 km2 catchment area, of which 183.4 km2 in Bulgarian territory. Its largest tributary is Velika river(Turkey). Major tributaries of Rezovska river in Bulgarian territory are Deliiska river and Dulboki dol river. In the 80s an adjustment was made at the river mouth due to disputes over the shelf zone with the Turkish side. In hydrological and hydrographic aspect Rezovo river as a border zone is poorly versed. 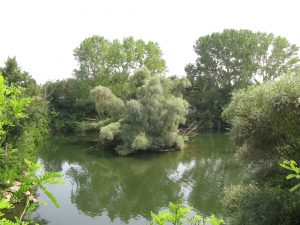 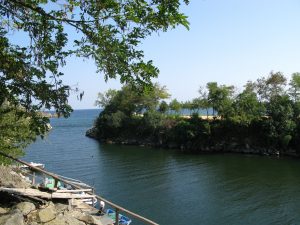 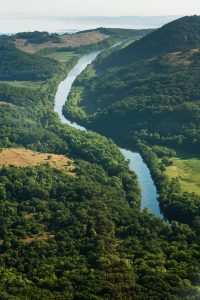 Ropotamo (from Greek Ροπόταμος – Ropotamos, meaning “border river”) is a river in southeastern Bulgaria, Burgas region, which passes through the municipalities of Sozopol and Primorsko to empty into the Black Sea – the Gulf of Ropotamo, between Dyuni and Primorsko. It takes its source from the Stranja Mountain and runs for 48,5 km. The catchment area of Ropotamo is 249 km2. The river has an average annual flow of 1,128 m3 /s at Veselie village, with its maximum in January and February, and the minimum – in August.

Ropotamo is formed by the confluence of two rivers – Rosenska River (left component) and Tserovska River (right component), located at 23 m altitude 1,4 km south of Veselie village, Primorsko Municipality. Tserovska River (named after Tserovo village or Staro Panicharevo and springing from the Bosna ridge of Strandja, 400 m above sea level, 500 m southwest of Bosna peak – 454 m). The majority of the river valley is grown with riparian forests of oak, ash, elm, hornbeam and others. The river is home to many species of fish – carp, chub and others. Around its Ropotamo’s mouth a long and wide firth (estuary) was formed, surrounded by the Black Sea with sand spits. The firth is navigable for small vessels and many pleasure boats float in it.

Ropotamo is especially well-known for its gentle water lilies. The nature here is breathtaking with its abundance of flora and fauna, and impressive rock formations (such as the so-called Lion’s head, lying on the right bank of the river, and small caves). The area of Ropotamo is home to more than 100 specimens of endangered species, registered in the Red Book, and therefore it was declared a nature reserve Ropotamo in 1940. With its area of about 1,000 hectares, it is one of the largest protected areas in Bulgaria. Here lies the highest sand dune in the Balkans. 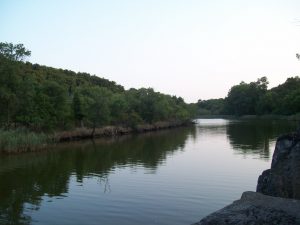 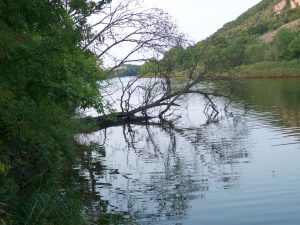 Mladejka River is 40 km long. It flows into Veleka River near the Thracian camp below Petrova Niva. Its old name is Karmalak, which means Dark River. This was the name of the village until the 1950s when it was renamed Mladejko (meaning “of young people”) because young people built the road along the river. Six bridges of the road have survived of which only two have been reconstructed recently. The rest have collapsed.

The numerous caves at the springs of the river are home to numerous colonies of bats, with a large number of valuable species. 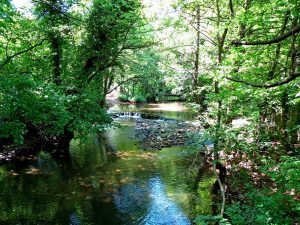 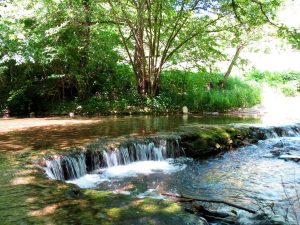 The main rivers in the Turkish part of Strandja are:

ÇORLU STREAM. It begins from Istranca Mountains ,in the east of Çerkezköy.It flows in the direction of  northeast-southwest, gathering a lot of streams such as Paşa Stream. Çorlu Stream gathers Marmaracık and Kütüklü Streams after flowing 5 km north from the city center.Again, it runs into Ergene River in the north of Muratlı. The water of the stream gets lesser in summer and it increases in winter due to the rainfall.

Due to the climatic, geological and geomorphological features, in Strandja have formed various types of soils. Cinnamon soils predominate, followed by specific for the mountain yellow soils and soils luvisols. Around the rivers are monitored peat marsh, meadow, swamp and marsh alluvial soils. Around seashore area found patches of saline soils, coastal sands and dunes.