The route starts with the village of Zabernovo and heads south along an old dirt road. After about 2 km it runs along “St. George” chapel, where in the altar a votive tablet of the Thracian Horseman is built. After a short descent it reaches Shtramnitsa river. It continued past it up to its flow with Veleka river. After that it runs along Veleka, along a forest road following the multiple bends of the river. After 10 km it reaches the area of Kachul (16 km from the starting point).

The area has places for camping and several tourist complexes and villas before and after crossing the secondary road (II-99) Tsarevo – Malko Tarnovo. To stay for the night there you need to book in advance. Further the route goes over the bridge on the main road Tsarevo – Malko Tarnovo and goes to the east. Along a gravel road it continues along the right bank of the river. 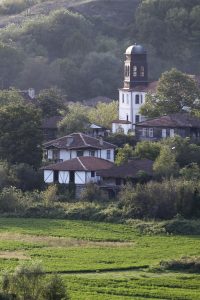 the village of Kosti

It reaches the village of Kosti where in May, Strandja periwinkle can be seen. 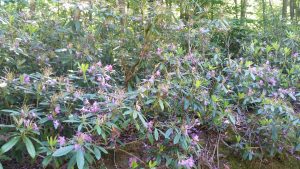 Then it goes to the left bank of the river and passes the area of Kulkata. Here Veleka becomes deep and slow. Along the dirt road, where meadows and ancient forests alternate, it reaches the village of Brodilovo, which is at the foot of the mount of Great Papia 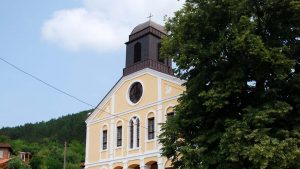 Church of the Brodilovo village

Then it passes through the village and takes to the southeast. From that point the route has two options – on both sides of Veleka river. On the map with GPS navigation the route is shown on the right bank of the river, which passes through the area of the Royal well and reaches the steel bridge over Veleka river. The alternative route runs along the left bank of Veleka, along a forest road. After about 20 min. it reaches the area of the lower mill. It continues to the area of Gechitet (river transition). If you turn right after wading the river the area of the Royal well can be reached. The trail continues along the left bank of the river to area of the Labor tap where there is a place for recreation. After about two hours it reaches the bridge over Veleka.

The river provides the opportunity for swimming, as well as monitoring forest and riparian birds and terrapins.

*The left and right banks are determined when standing with your back to the sources of the river and facing the sea or estuary.