A part of today’s Ropotamo reserve was declared way back 1940 a place “to preserve the forest communities of dense forest type located along the eponymous river, which crosses the big sand dunes and flows into the Black Sea.” Over the years the area changed its status repeatedly, but always remained a protected area. In the 1960s it was even a national park. The most recent categorization is from 1992 when it was declared a strict nature reserve “for the conservation of the unique flora and fauna along the coast near the mouth of the eponymous river.” The reserve has an international status as part of the Ropotamo complex recognized as wetland of international importance under the Ramsar Convention, declared an Important Bird Area and a part of Ropotamo Complex Protected Area from Natura 2000 network.

This small area is home to a great biodiversity. In figures this means about 60% of the freshwater ichthyofauna of Bulgaria, 60% of the herpetofauna, 50% of the nesting avifauna, and 57% of the mammal species.

The reserve is a habitat for many rare animals. The European bird migration route Via Pontica passes through here. The large number of wetland zones in the area is a great base for many nesting birds as well as feeding grounds for wintering and migrating birds. The reserve hosts 226 species of birds (woodcocks, finches, thrushes, sandwich terns, plovers, wild geese whooper swans and mute swans, songbirds, herons, pelicans, ducks, sea eagles, hawks, vultures, etc.), 8 of which are globally endangered and 70 are included in the Red Book of Bulgaria.

The reserve is inhabited by 50 species of mammals. Among them are: red deer, fallow deer, roe deer, mouflons, foxes, jackals, otters and colonies of bats in the rock caves. Extinct mammal species are bears, wild cats and seal monks.

The ichthyofauna is represented by 14 species of fish which permanently inhabit the firth area of the river: pearl mullet, vimba bream, rudd, carp, silver carp, and chub. Many more species are registered as temporary inhabitants. These are the Black Sea and Begendik shad, the rainbow fish, etc.

600 species of vascular plants have been identified in the reserve. There are preserved about 11% of the plant species included in the Red Book of Bulgaria, which is 83 species (71 rare, 11 endangered and one extinct). 16 species of vascular plants are endemic and 23 tree and shrub species are Tertiary relicts. On the territory of the reserve you can see elm, ash, maple, black alder, hornbeam, common clematis, hazel, sumac, ivy, flowering ash, oak, beech, willow, Thracian tulip, and spring snowflake. The marshes and spills are overgrown with reeds, bulrush, cattail, iris, tamariks, yellow pond-lily and white water lily. On the sand dunes there still grow the sand lily, the sea wormwood, the wild fennel, etc., which are typical of the South Black Sea coast.

An interesting part of the reserve is the island of St. Thomas, better known as the Snake Island. It is located in Arkutino Bay. It is a nesting place for water birds, a habitat of Günther’s vole and wild paddle cacti planted here in the 1930s. Attraction for tourists on the Black Sea is the boat trip from the dock of the Ropotamo River (under the bridge of E87) to the mouth of the river. Herons and kingfishers fly past the tourists during the boat trip. Particularly attractive are the turtles which bask in the sun on the rocks or fallen trees on the river banks. Very interesting
is the view to the Lion’s Head. 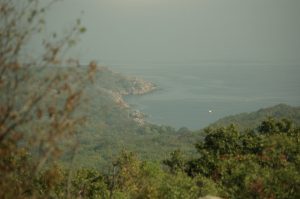 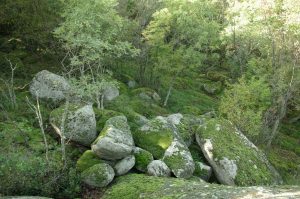 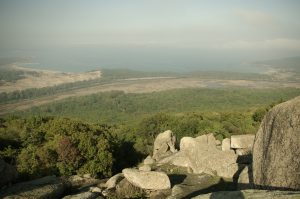